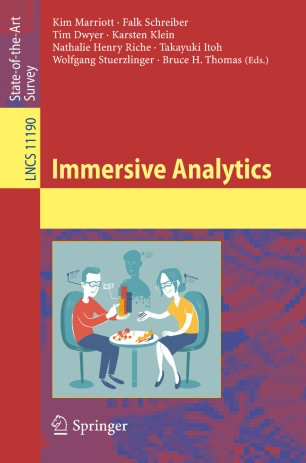 We live in an age where the amount and complexity of data available to us far surpass our ability to understand or to utilise them in decision-making. Analysis of such data is not only common in the physical, social, and life sciences, but is becoming an integral part of effective planning in business, government, e-health, and many other aspects of modern society. Furthermore data analytics is no longer solely the preserve of scientists and professional analysts as personalised data analytics becomes increasingly common.
Visual analytics has become a key technology for human-in-the-loop data analysis. While the standard definition for visual analytics is agnostic of the actual interface devices employed by visual analytics systems, the affordances of the display and input devices used for analysing data strongly affect the experience of the users of such systems and, thereby, their degree of engagement and productivity. For practical visual analytics tools, the platform for interaction is almost always a standard desktop computer. A systematic approach to developing analysis and decision support tools that move beyond the desktop is lacking.
Immersive analytics is a new interdisciplinary field that brings together researchers and practitioners from data visualisation, visual analytics, virtual and mixed reality, human–computer interaction, and human-in-the-loop algorithmics to explore these new forms of analytics tools. The goal is to remove barriers between people, their data, and the tools they use for analysis by developing more engaging, embodied analysis tools that support data understanding and decision-making everywhere and by everyone, either working individually or collaboratively.
This book is the outcome of two coordinated workshops on immersive analytics held in 2016. The first in Shonan, Japan, took place in February and organised by Takayuki Itoh, Kim Marriott, Falk Schreiber, and Uwe Wössner with the help of Karsten Klein, the second was held in June at Dagstuhl, Germany, and was organised by Tim Dwyer, Nathalie Henry Riche, Wolfgang Stuerzlinger, and Bruce H. Thomas, again with the help of Karsten Klein. In all, 25 leading international experts in data visualisation, visual analytics, human–computer interaction, virtual reality and augmented reality attended the first workshop, with another 38 experts attending the second. There was a sizeable overlap of experts between the two workshops that provided a sensible continuity of concepts.
The two workshops explored the definition of immersive analytics and identified the structure and focus of this book. A working group for each chapter was formed at the workshops, with the participation of invited experts as needed, and the groups wrote the chapters contained in this book. A critical goal was to develop a vision of the research domain for immersive analytics and a roadmap for future investigations. Authors submitted manuscripts for their chapters in mid-2017. These initial versions were first reviewed "internally" by one of the book editors. After an initial round of revision based on these internal reviews, the updated manuscripts were sent to expert reviewers invited from the community. We are grateful to these people for their detailed and insightful reviews.