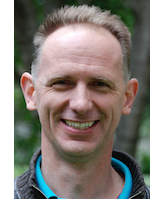 Wolfgang Stuerzlinger (original spelling Stürzlinger) is an Austrian-born Canadian researcher, scientist, and inventor. He is a Professor in the School of Interactive Arts and Technology at Simon Fraser University.

Starting with 1981, Wolfgang Stuerzlinger worked as the technical lead for RZL Software GmbH, an Austrian tax consulting software company, where he was also the chief architect and developer of a large application framework that supported the application suite for over 20 years.

He became an Assistant Professor in the Department of Electrical Engineering and Computer Science at York University in Toronto, Canada in 1998, an Associate Professor in 2003, and a Professor in 2011. Since 2014 he is at the School of Interactive Arts and Technology at Simon Fraser University in Vancouver, Canada. He is well-known for his supportive supervision style and has supervised more than 50 graduate students to completion, six of which are presently working as faculty members.

He presented the first method to objectively investigate the performance of 3D user interfaces for selection in 2009, which is independent of human and technical speed-accuracy tradeoffs and which is now part of the standard methodology to assess the efficiency of a 3D user interface. Moreover, he has presented a series of methods to make 3D content creation and manipulation more efficient. Recently, he was the first to identify that the vergence-accomodation conflict fundamentally limits 3D interaction performance in current stereo display systems and VR HMD's. Stuerzlinger was deeply involved in the IEEE Symposium on 3D User Interfaces (3DUI), which was merged into the IEEE International Conference on Virtual Reality and 3D User Interfaces (VR) in 2018. He is also a founder of the ACM Symposium on Spatial User Interaction (SUI).

Stuerzlinger was also part of the group that defined the field of Immersive Analytics through a book in 2018, whose chapters have been downloaded more than 33,000 times as of Nov. 2021. Building upon the fields of data visualization, visual analytics, virtual and augmented reality, data science, computer graphics, and human-computer interaction, Immersive Analytics investigates how new interaction and display technologies can be used to support analytical reasoning and decision-making. His work in this area focuses on the role of interaction as well as alternatives and scenarios.

His work on better methods for user interface design, especially responsive GUI layouts, has been adopted by the web community, e.g., in ResponsivePX, Google's Resizer, or BBC's Wraith.

Several technologies that we use in our lives fail occasionally. Examples include autocorrect, gesture recognition, tracking systems, speech recognition and various automotive systems, such as lane detection. The objective of Stuerzlinger's work in this area is to reduce the negative impact that such systems can have on our lives, through better user interfaces. Several commercial systems, such as Google Android autocorrect and Grammarly, have recently adopted the corresponding innovations, such as highlighting grammar mistakes and allowing users to re-correct autocorrections. His work was recently featured in a keynote at the Graphics Interface 2019 conference.

Stuerzlinger has served on over 85 program committees and been program chair for nine scientific events. He was also a member of the board of directors for the Graphics, Animation and New Media Network of Centres of Excellence (GRAND NCE) and continues to serve on various boards and steering committees.

Stuerzlinger’s work has received several awards, with some of the most recent ones being: